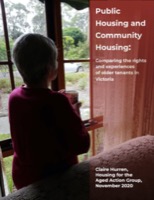 Housing for the Aged Action Group (HAAG) released a report today comparing the experiences of tenants who live in public housing with those who live in community housing, finding that there are significant differences for tenants in exercising their rights.

The report compares the regulatory frameworks of housing owned and managed by the State Government, with housing managed by not-for-profit community housing providers. Tenants in both types of housing were interviewed.

“We welcome the recognition of the need for serious investment in housing both as an economic stimulus and as a long-term health solution for older Victorians,” said Fiona York, Executive Officer. “However our report demonstrates that the decision to transfer existing Public Housing to Community Housing not based on evidence of better outcomes for tenants.”

“Our report recommends that public land should be used for public housing, managed by the Government. Given the differences in the lived experiences for tenants in public housing vs community housing, we urge the Government to ensure that regulation across both types of housing is consistent and fair, so that tenants are treated equally no matter who their landlord is. This includes rent setting, tenancy selection, modification and repairs,” she continued.

“We welcome the announcement of a review into the regulation of community housing, and look forward to tenants being given the opportunity to participate."

Fiona York can be reached for further comment on 0449554142 or at fiona.york@oldertenants.org.au.

Watch the launch of the report at today's Annual General Meeting

Wednesday, February 10, 2021
Shane and Fiona interview Alistair Webster about the Building Better Homes coalition, and their campaign to change the Building Code so that all new homes are built to be accessible for everyone. We talk about universal housing design, why its important and what you can do to lobby building ministers from across Australia.Check out Building Better Homes @BetterHomesAussign on to the petition: www.change.org.au/BetterHomes
Listen in on 3cr.org.au

HAAG released a report today comparing the experiences of tenants who live in public housing with those who live in...

This information is provided for older renters in Victoria, covering some of the new programs that can help with your...

An open letter calling on the government to address the urgent situation concerning homeless people sleeping rough and...

HAAG was shocked at reports of a “hard lockdown” being enforced by police on public housing tenants in Flemington and...