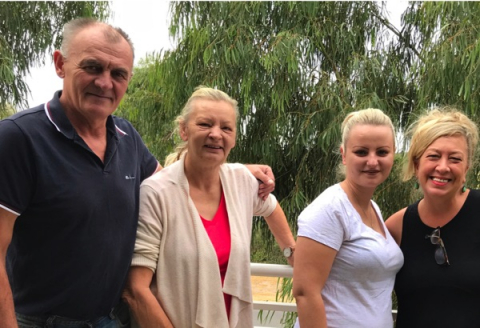 Social, cultural and linguistic diversity are characteristic of modern, inclusive and globally connected cities such as Melbourne. For generations Melbourne's suburbs have been shaped by cultures and people from all around the world. The Italians went to Carlton, the Greeks found Richmond and the Vietnamese made Footscray home. People often choose to live close to people from the same ethnic background as it enables them to connect with family, friends and community, to communicate with others who speak the same language, to buy food from shops which sell traditional foods, and to attend the same church, mosque or synagogue.

In recent weeks, Home at Last (HAL) were able to find secure, affordable and appropriate housing for three clients, all from a Serbian background in the same block of social housing properties located in the City of Brimbank.

Slavko (58) was referred to our Home At Last program as he was homeless and couch surfing. He stated that his already poor health deteriorated rapidly due to being homeless. ‘I was not eating properly as I was not allowed to cook and I was just happy that my friends offered me a couch to sleep on’, stated Slavko.
Mother and daughter, Vesna (61) and Irena (29) approached our service as they were being evicted from their expensive and poorly managed private rental unit.
The pathways and documents people are required to complete to access the public housing system are confusing, complex and overwhelming for most people. This was the experience of Irena, Vesna and Slavko. “I was stressed out about all the paperwork, everything was going through my mind. I understood what I needed to do, but so much paperwork!” This feeling of panic and uncertainty about even beginning the application process is common among people who contact Home At Last for advice and support - it has the potential to be even more daunting for a person if they are from a culturally and linguistically diverse background. This is where a HAL outreach worker steps in! Melis worked with Irena and her family, and Slavko to holistically asses their housing situations, provide them with housing options, submit their housing applications and support them whilst waiting for application approval.

The support from Melis continued all the way through to when they are settled into their new homes. Slavko said he has “the greatest place to live in”. When Melis asked him how much his living situation has improved from 1-10 he said “TOO MUCH!”. Vesna reiterated this sentiment sharing that now her rent is more affordable she feels “very, very happy”. It was obvious that now Irena, Vesna and Slavko feel secure and safe in their homes after a long time feeling fear about their housing situation. Fiona asked how it felt living in a safe home near people who know a similar culture and speak Serbian too. “We are now living here in peace, living here with other people. We have no problems with anybody”, said Irena. This sense of belonging, safety, community and peace is an intrinsic part of the service HAL endeavours to provide. This sense of safety extends beyond the physical; it includes spiritual, cultural and emotional. It is this holistic understanding of safety and belonging that HAL regularly considers; in this situation HAL successfully secured housing for multiple people who speak Serbian in the same public housing locality to nurture their shared community, language and culture. Vesna said, “Without HAL who knows what would have happened to us”.

Slavko, 58, stated that the City of Brimbank is becoming an increasingly popular local government area from the Serbian speaking community. Vesna and Irena said that ‘having a neighbour who speaks the same language makes it easier to communicate’. Feeling hope and a sense of belonging is important to our organisation and we try to cultivate this as we provide ongoing and personalised housing support.

When asked how she felt after first coming to the HAL drop-in-service, Irena said, “I had hope; I had enormous hope".

Older people in New South Wales waiting for social housing were dealt a blow today, with the NSW Government failing to support a recommendation by one of its own inquires... END_OF_DOCUMENT_TOKEN_TO_BE_REPLACED

More Victorians than ever before are approaching and entering retirement without owning their home, according to analysis of the 2021 Census commissioned by Housing for the Aged Action Group (HAAG)... END_OF_DOCUMENT_TOKEN_TO_BE_REPLACED