Moving in with mum 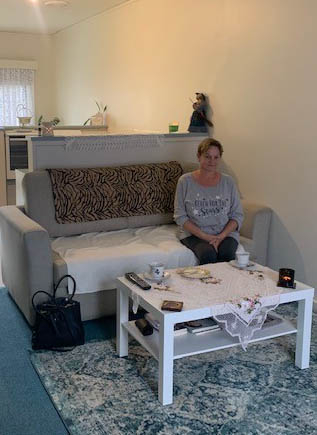 Vesna became homelessness after her private rental property became far too expensive on her income and it was no longer a viable option as a single person. Private rental was far too unaffordable even with the part-time employment she had at the time. She had little choice but to leave her tenancy and live between the homes of friends and relatives on a temporary basis.

Many of the properties she was couchsurfing at were public housing properties, meaning she could only stay for a maximum or 2/3 days to avoid jeopardising the tenancies of her friends and family. Vesna was exhausted and anxious all the time – worrying about where she will be staying next and stressed about her health issues which were becoming worse as a result of moving around so much. The future of her housing was unpredictable – and at the age of 53 years old, she was not considered eligible for elderly housing stock which is reserved for those aged 55 and over.

Vesna soon got in touch with Home At Last service where she was assisted with upgrading her existing application on the Victorian Housing Register to Homeless with Support category. She was also supported with a letter to be considered for elderly housing, due to her health issues. Her application was approved soon after and she was placed on the priority housing list. As Vesna’s mother was already residing in public housing, where she wished to be close to her to provide practical and social support. The housing worker who was responsible for the units she was residing at was contacted and advised that Vesna has a current housing application and in urgent need for housing in the local area to be close to her mother.

After 12 months of waiting for housing, Vesna received a housing offer – on the same block of units as her mother. Vesna said that as soon as she was advised of the news of the housing offer she cried tears of relief and happiness. Vesna is now housed in a lovely block of elderly units in Melbourne’s north and couldn’t be happier. She told us

Vesna moved in last month and is very house proud and has settled into her new home well with some household items provided with the support of Home At Last. She Her next goal is to work on the small patch of garden at her property and plant a lemon tree and some veggies!

More Victorians than ever before are approaching and entering retirement without owning their home, according to analysis of the 2021 Census commissioned by Housing for the Aged Action Group (HAAG)... END_OF_DOCUMENT_TOKEN_TO_BE_REPLACED

The lives of older people experiencing homelessness, particularly older women, will improve markedly if the New South Wales Government moves to implement the recommendations handed down today by the Social... END_OF_DOCUMENT_TOKEN_TO_BE_REPLACED